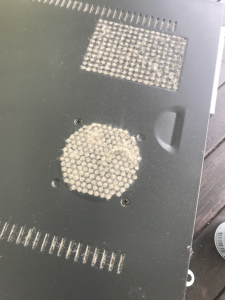 END_OF_DOCUMENT_TOKEN_TO_BE_REPLACED

The initial run of overviewer seemed to work well. Yesterday, I re-enabled the cron job to update the map every day at midnight. When I got up this morning, I discovered that the server had died at 00:16.

I restarted the server and tried updating the map by running overviewer from the command line, and the server switched off abruptly after a few minutes with no error messages.

There’s nothing in the logs, and the server doesn’t just die, it powers off. The most likely cause is that the processor is overheating, but it seems odd that it completed the initial build during several days of triple-digit temperatures with server room temps reaching the mid 80’s, and last night the temp in the server room was in the low 70’s. But CPU fans and cooling paste can fail over time, and perhaps overviewer actually taxes the processor more when most blocks are already up-to-date.

Right now the server is running, but the maps won’t be updated until at least the weekend when I have a few moments to troubleshoot.

Some amazing volunteers have been updating Minecraft Overviewer to work with the new 1.13 file format. I am running a test version now. It estimated sixty hours (!) to render the new map from scratch, but it’s going a bit faster than that.

UPDATE: The rendering is finished (in just under 30 hours) and the new map is installed. As expected, there are blocks that don’t render but overall it looks good. Check it out!

The recent (18July2018) update to Minecraft 1.13 has broken the Survival Server map. There are no immediate plans to update the map generating software (overviewer), as apparently Mojang’s new chunk format is poorly documented and overviewer will require major refactoring to work with the new format.

If a compatible update becomes available, I’ll get it running as soon as possible.

The discussion about the possibility of an update is here, along with information for those who might wish to contribute money or code:

A few of the minecraft servers are still up, but are seeing little use. The web site needed a re-vamp including TLS support (https:) and a more modern content management platform (WordPress).

I’m not too sure where (or when) I’ll go from here.